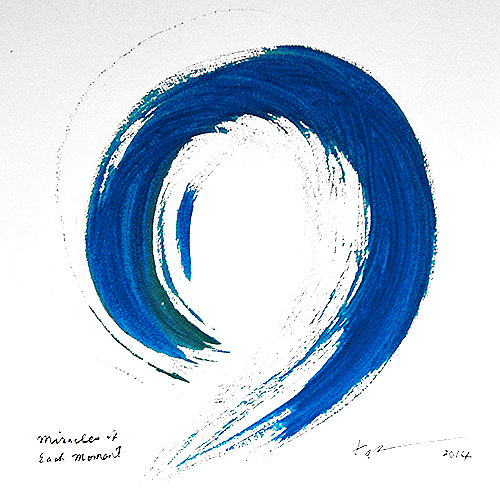 Photo by Kris Herbst
Enso by Kazuaki Tanahashi, 2014
The pure wind circles the earth and shakes it time after time,
But who can pluck it up and show it to you?
Zen Master Keizan
The Record of Transmitting the Light
A child with a sheet of paper came up to Zen Master Ryokan and asked, “Please write something for me.” “What will you use it for?” Ryokan replied. “I'll make a kite. Please write something that will help my kite to fly.” Ryokan then wrote four big characters “Sky Above Great Wind” and gave the calligraphy to the boy.  The phrase and his unpretentious brushstrokes are beloved throughout Japan. The kanji (illustrated below) are read from the right column top down to the center column, ten jo dai fu; the left column says, "Written by Ryokan." 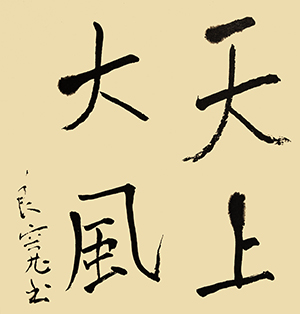 Photo by Kris Herbst
Sky Above Great Wind, a plaque from the Bunsui Ryokan Archive, Tsubame, Japan, 2015
For his entire life, the poet-monk Ryokan, given the Buddhist name Daigu, or Great Fool, poured himself out and clung to nothing. His compassion, humility, and boundless serenity inspire this community to take up the path of awakening. Zen is the practice of the oneness of life and reaches wherever life reaches.

Walking up beside the flowing water,
I sought the riverhead.
Arriving at the source, I stood astonished.
For the first time, I realized that no matter how long
we walk, the true source cannot be reached.
Since then, I rely on my staff and play with the
murmuring stream, here, there and everywhere.
Ryokan, Ryokan Interpreted, Shohaku Okumura

Sensei Susan KōDō Efird, Guiding Teacher
in the lineage of the White Plum Asanga
that draws its roots from Soto Zen
practices in Japan
_____________________

Unless otherwise noted, all Ryokan poems and stories about him are quoted from Sky Above, Great Wind (Shambhala 2014) by Kazuaki Tanahashi. Another excellent book on Ryokan is Ryokan Interpreted by Shohaku Okumura (Dogen Institute 2021)