Sky Above Great Wind
SKY ABOVE GREAT WIND
About Zen Master Ryokan​
Looking back, I see more than seventy years have
already passed.
I have tired of seeing through right and wrong in the
human world.
Snow in the late night covers all traces of coming
and going.
A stick of incense burns by the old window; I sit.
"Zazen" by Ryokan, Ryokan Interpreted, Okumura
Ryokan was given his monk's name Daigu (Great Fool, Good and Broad) when he ordained at age eighteen at Kosho Temple. Fifteen years later, he received a teaching stick and an approval poem from Kokusen Roshi, the abbot of Entsu Monastery.

Photo by Susan Efird
​Ryokan with his begging bowl, near his grave at Shimazaki, Japan
Ryokan (1758-1831), along with Dogen Zenji and Hakuin, is one of the three great figures of Zen in Japan.  Shohaku Okumura, Zen master and highly esteemed commentator on Dogen, says that Dogen and Ryokan are his two most important teachers.  Unlike Dogen and Hakuin, Ryokan was never head of a temple, and lived mostly as a hermit and begged each day for his food. He enjoyed playing with children. People of all walks of life sought him out because they recognized the depth of his realization and were drawn to his compassion and unadorned humanity.

Ryokan’s Zen practice included his poetry and calligraphy.  He is one of the foremost poets of the Edo Period that included Basho, Buson, and Issa. His poems in Japanese and Chinese styles are lofty, imaginative, and direct. Ryokan was also a master calligrapher with an irrepressible style. He created brushstrokes with distinctive thin lines in part because he was so poor he often could not afford brushes and used twigs instead. And when he had no ink or paper, he practiced his strokes in the air. 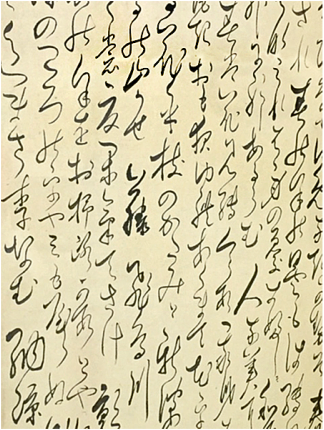 ​An example of Ryokan’s calligraphy on display
at the Bunsui Ryokan Archive, Tsubame, Japan, 2015
​Ryokan was born in the port village of Izumosaki in Echigo Province on the remote west coast of Japan. His father was a local dignitary and a respected haiku poet. After completing rigorous training at Entsu Monastery, which adhered to the Soto school of Zen practice established by Zen Master Dogen, Ryokan at age thirty-three embarked on a long pilgrimage, visiting monasteries all over Japan. Along the way he became disappointed with the lack of genuine spirit among Buddhist practitioners. 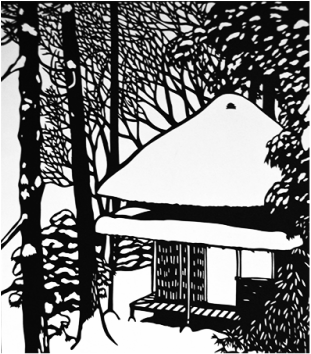 In 1796 Ryokan decided to settle in a one-room hermitage called Gogo-an, or Five Scoop Hut. Surrounded by cedars and pines, halfway up Mount Kugami near a Shingon temple, the hut was about twelve miles from his ancestral home. Gogo is half a sho, the small amount of rice needed to sustain a person for a day; an is hermitage. He lived a simple life and begged for food in nearby villages. He survived harsh weather, sickness, and loneliness, yet still produced his mature poetry and calligraphy. He sustained his practice with gentle humor. Stories abound, often hilarious, about his kindness and generosity.

After twenty years, when he could no longer make the snowy trek for his begging rounds, Ryokan moved down the mountain to the forested compound of Otogo Shinto Shrine. Here he lived in a two-room hut beside the small sanctuary. Often malnourished and ill, he continued to write poems in his spirited calligraphy.

​By 1826, when Ryokan was finally too weak to walk to the villages, a supporter invited him to live at his home in Shimazaki, on the plain midway between Izumosaki and Mount Kugami. While he accepted, Ryokan insisted on living in the woodshed behind his patron’s garden. There he spent the last five years of his life. During that time he fell in love with a young Zen nun who became his student. They wrote each other many poems. He died at 74.

If someone asks
My abode
I reply:
"The East edge of
The Milky Way."

Like a drifting cloud,
Bound by nothing:
I just let go
Giving myself up
To the whim of the wind
—Ryokan, trans. John Stevens